Showing posts from July, 2009
Show All

Dursley goes green on the way. 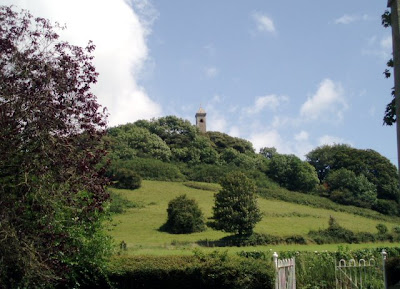 Just finished the leg from Dursley to North Nibley. As you can see from picture ( 2 ) the signposts are in a very tasteful green and gold . Furthermore upon entering Dursley , you can read the legend Dursley Historic Market Town on the Cotswold Way. Excellent ; another town with pride. Picture (1) shows the view from Stancombe towards North Nibley , with the iconic Tyndale's Monument see ( Way ahead 30/6) on the skyline The walk , was well marked and included a good contrast in uphill and downhill walking. Even the 'bus back to Dursley was on time. A good outing indeed. Ciao4now Ck. NP. "Rio" by Michael Nesmith (of Monkees fame ) It just makes you feel good.
Post a comment
Read more

Reflections at a Cricket Festival 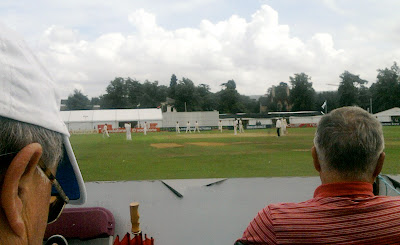 Pitched up yesterday at the Cheltenham Cricket Festival; found out who we (Gloucestershire) were playing against (Northants ) and made my way into the ground. I try to go once a year , in order to maintain the social law , stating that:' If one wishes to sleep in the sun in a field , then watch cricket ' However , that plan failed , on two accounts : 1 - temperatures were on the low side ( 18/19C) and there was a constant threat of sharp rain showers. 2- too much action upon the playing surface ; wickets were seen to tumble ( 15 in the day's play ) , eleven of which transpired during the afternoon session ( 1:30 to 6:00 p.m.) that I saw. The usual modus operandi , when entering a cricket ground is as follows. Select your seat affording a view in the general direction of the pitch. Sit and wait to absorb the rhythm of the game and realize that nothing much is going on. Wait again and realize that really nothing is going on. Open your morning paper and check the
Post a comment
Read more

Good and Bad : on The Way

Have just concluded the stretch of the Way from Cleeve Hill to Dowdeswell . Cleeve Hill is the highest point of the cotswolds at 1083 ft. or 330m. Source ' Wikipedia ' The views , this day were clear with high visibility ( see Picture 1) , where you can see , nestled in the valley to the west Cheltenham Racecourse. The waymarking was generally good , with posts to guide you to the summit and trig point. However , when the path left the common , there was an area of doubt as to which right hand route to take into the woods. The matter was resolved at the bottom of the slope with a friendly post , by the gate ; but it had created a few moments of anxiety in this walker's mind. Further on in the journey ; navigation became quite a problem when reaching the quarry (see Picture 3). The first shock was noticing the fly tipping of tyres , rubbish and even a burnt-out car; which after the beauty of the walk was quite an eye-opener. After reeling from this outrage , one
Post a comment
Read more 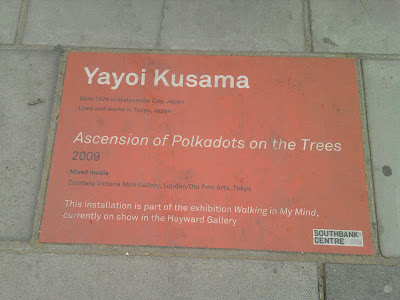 Whilst walking along the South Bank in London , I espied these trees covered in dots. I found out  afterwards that it was an art installation by Yayoi Kusama , who has an exhibition running at the nearby Hayward Gallery. The trouble is I am beginning to think of further colours on tree barks ; am I going dotty I wonder ? Ciao4now Ck. P.S. right click ( Windows ) or click  ( Mac)  on pics. to see more detail.
Post a comment
Read more

More On The Way 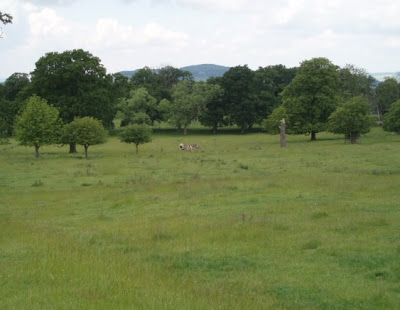 As one can see from the above picture (3 )  The Cotswold Way  became an official  National Trail ( one of fifteen )  in 2007. It therefore , in my humble opinion  (IMHO in textspeke !)  should carry a measure of prominence and in particular carry a measure of quality waymarking . This has ,  in my experience of the walk so far ( Chipping Campden to Cleeve Hill +  North Nibley to Wotton Under Edge , and finally the last mile stretch into Bath City ) has generally been carried out in a consistent fashion , apart from the start and finish - return to  posts  ' Beginning  , Ends , & The Man With The Trimba  and   Watch This Space '   However  a raise of the cap , should be given to the worthy citizens of Wotton Under Edge , who elected to produce signposts of blue and white colour , proclaiming  The Way  throughout their Town ( photographic evidence to follow ) ; a sense of civic pride has been restored.  The Cotswold Way  has  been a backdrop to my life as a Gloucester
Post a comment
Read more
More posts