Showing posts from November, 2017
Show All


All had played with Captain Beefheart ( aka Don Van Vliet ) at various times and their mission was to recreate songs from the Beefheart canon.

The Magic Band Farewell Tour to which I attended with friend K.
last Monday 20th November 2017 at The Fleece, Bristol.

Here's a thought. How many bands with great musicians after an interval of fourteen years still charge the same for their tickets ? Not many I venture.
Arriving early I quickly grabbed the latest tour T shirt; still selling for a modest fifteen pounds.

Pulling rabbits out of a hat indeed.
The 'Fleece' quickly filled up. eventually achieving sell-ou…
Post a Comment
Read more

Catch up with Photos. A coded life? 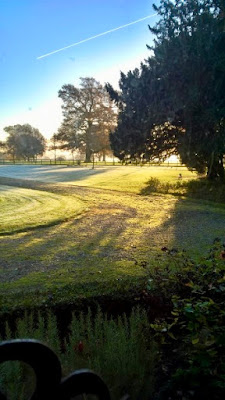 The nights draw in and real racing returns. The majestic leaps; the noble presence; triumph and disaster lie side by side. Elation and despair. The Winter Kings return for our pleasure.

Once a year, the River Thames is drained near Richmond for general maintenance .

Courtesy LJC.
So for a short time it is possible to walk across to Eel Pie Island. More explanation here:  Thames Drain

The above is a picture taken from inside the new, American style burger bar " Five Guys, " which has recently opened in Cheltenham.

Young d. took me there last Tuesday 14th November 2017. A brightly, lit space, it was notable for a deafening sound system, which threatened to overwhelm the wou…
Post a Comment
Read more
More posts