Showing posts from July, 2013
Show All

My My, Back To Eel PIe:.Thames Walk. 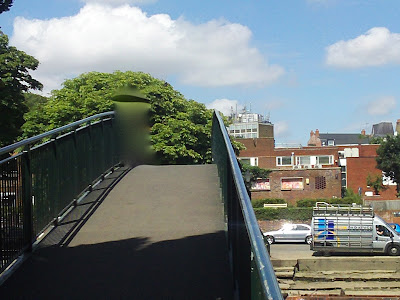 
In a recent blog ( see above )  D. and I visited the Thames near Twickenham and looked across the river to Eel Pie Island.

Last Wednesday ( 24/7 ) we revisited the scene and crossed the bridge to the privately owned small island.

All of the houses (about 50 ) there are old, but interesting buildings.

The above shown,  had an old advert for HMV records on the side of the frontage.

I was greatly amused with the notices/names I saw there. Here are three examples:

Here are some views from Eel Pie to the 'main-land.

Only a short walk around, but an engaging visit.

Eel Pie Island, in the 60's  had a thriving blues club ( The Eel Pie Hotel ) where the London based groups performed, including 'Steam Packet' ( see above blog) and 'The Rolling Stones.' The Hotel was later burned down in an mysterious fire.

The above photo, together with the 'Steam Packet' was on a notice board, looking over to Eel Pie …
Post a Comment
Read more 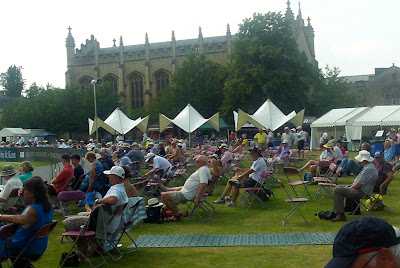 It was as 'Jeeves' might say " A trifle moist " at the Cheltenham Cricket Festival, last Thursday ( 18/ 7 ).
A somnolent crowd yawned and gained a measure of consciousness with the noise of ball on bat and the odd dismissal appeal. All far too exciting.

Before the watching/resting crowd got too supine, during the tea interval  a distraction, in the form of a ladies' fashion parade ( whatever next. )

Mention of " Jeeves ' reminds me of an interesting piece of information, kindly supplied by my friend (D.M. ). Apparently, at this very festival, one hundred years ago, P.G. ( Plum) Wodehouse saw Percy Jeeves, the all-rounder play. So much was he taken with this cricketer,  that he later borrowed the surname and ' Jeeves '  the gentleman's gentleman to his master Bertie Wooster was in a literary sense, born.
CccccccccccCcccccccccccc
Stop Press  I suppose I should have told you that Gloucestershire were playing Worcestershire…
Post a Comment
Read more

Bring On The Ashes: Gromits Part 2 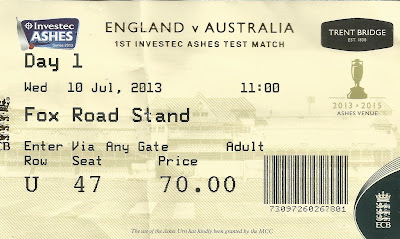 As you can see from the above available evidence I was lucky enough to attend the first day of The Ashes Test at Trent Bridge, Nottingham,

You can also see why, at the ticket prices, one day's play was enough.
I travelled, via train , with my friend D., who kindly got these tickets originally, nearly a year ago; such was the demand.

There was cloud cover throughout the day and the temperature varied between 19 and 20 degs. , making for comfortable viewing.

Here is my simple timetable for this engrossing day:

!0:59 The Red Arrows swept across the ground in a fly-by.

English team came on to the pitch in fire and smoke.  England won toss and elected to bat.  Let battle commence!

I have to say at this juncture; I found it a little un…
Post a Comment
Read more

Gromit Special: On The Trail At Bristol Part1 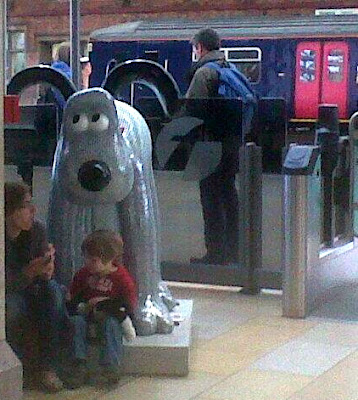 Last Tuesday (2 / 7 ) D. and I went by rail to Bristol Temple Meads Station, to look for Gromit Sculptures around the city of Bristol.


About Gromit Unleashed! Led by Wallace & Gromit’s Grand Appeal and Aardman Animations, Gromit Unleashed is a public art exhibition in which giant sculptures of Gromit, decorated by invited artists, have been unleashed on the streets of Bristol and the surrounding area. At the end of the art trail, the sculptures will be auctioned to raise funds for Wallace & Gromit's Grand Appeal, the Bristol Children's Hospital Charity. There are 80 sculptures to find; which can be D/L via  Gromit Trail or to mobiles as a special app ( cost 69p -proceeds to charity).

D. and I really enjoyed looking around Bristol. Here is part one of our finds.
Enjoy: 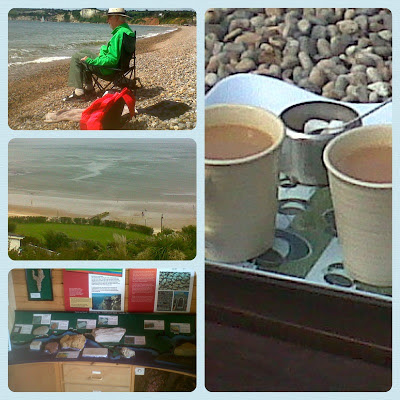 Just got back from a couple of days on the Dorset and East Devon Coast, visiting Lyme Regis; Seaton and Beer.

Nothing beats a nice cup of tea on Beer beach and then a bit of sea-watching at Seaton.
The bottom left hand corner shows an information centre at Beer, relating to facts about the nearby Jurassic Coastline.

The weather was warm, the sea was calm and both D.and I enjoyed a relaxing time.


The above pub (The  White Swan) top right is situated by the Thames, opposite to Eel Pie Island.

The local Twickenham Brewery brews a hoppy, fruity, beer called (Naked Ladies 4.4% ) which of course, The White Swan sells. The name is inspired by the Naked Ladies statue ( top left) in nearby York House Gardens.

The bottom picture shows a raised step from the kerb; placed there to avoid flooding in the gents at the river's high tide!


Eel Pie Island is an Island in the River Thames.