Come on shine a little 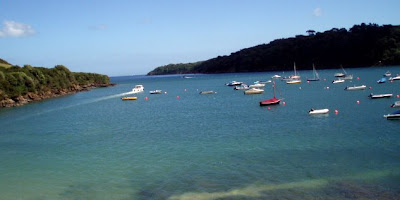 A crazy world , horse racing cancelled in Victoria , because of heat wave (43.5 C) see Gordon's  Blog "Adelaide in pictures " (my blogs I'm following ) , whilst here it's all cold and depressing. Here is a holiday picture to cheer us ; from Devon.
Yesterday (30/01/'09) saw the passing of two different , but special people.
John Martyn , guitarist and songwriter and Mr Bill Frindall , statistical facts keeper for radio's "Test Match Special ". They were both sons of the sun , in contrasting ways.
I remember in the '70s seeing John playing , sitting ,  head down with curly beard , on a lazy
July summer afternoon at the Cambridge Folk Festival. He was totally engrossed in his music and seemed to care little about the audience ; as long as they were quiet , happy and warmed by the solar glow . He bent the notes through his echoplex machine and mumbled the words into the mike ; looking up on occasion at the sky with a wry smile . He was content.
It was years later , upon  listening to his records , that I realized the quality of his lyrics and the depth of his music. In particular " Bless the Weather " and " Solid Air" are two CDs that stand up with the best of them. I gather he became a victim of his excess , in matters chemical and liquid ; but in my head he will always be that sun lizard on the stage working out his muse.
Bill , on the other hand  never really existed (did he ?) , his was always the word of knowledge from the back of the Test Match Studio , answering some arcane scoring point. You felt he relished a challenge and if , heaven forbid , he couldn't give  colleagues the result of the enquiry , instantly , It was as if  they had  scored some notional points themselves. Bill , of course was never beaten for long and always came back with the definitive answer. He will be a hard act to follow. He was the only one to understand his notation , which although appearing scribble to ordinary mortals , actually worked. I trust the  heavenly  pitches are in good order , with just a little bit of turn.
RIP Bill & John.
NP.   "May You Never "  by John Martyn.
Ciao4now
Ck.
Bill frindall john martyn