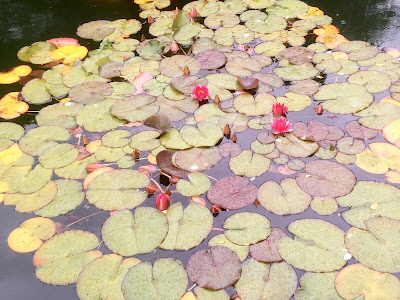 It is foretold .
All things have rhythms .
The urgency of passion,
The avian need for nests,
The daily opening and closing
of the lily pad.
The slow and gradual
growth of plants and trees.

It is foretold.
We are controlled by seasons .
A cycle of change.
Spring rains wake the soil.
causing green shoots to rise,
stretching  like sleepers from the
moist earth.

It is foretold.
Summer sun will tan and
darken the shoots to golden
brown.
The wheat will rise and ripen.
Their heads will caress the
prairie wind in an endless
undulating dance to the horizon.

It is foretold .
In a stygian blackness
nitrogen- rich yellow thunder
spears will anoint the earth and
pods will awake and open
seeding the sky with plague.

Leaving the wheat to crumble and
die in the iron-fist of the winter
frost.

It is foretold.
As numbers decline like
shoals of herring in a
Global net
Mankind will  be at
The epitaph of
Page zero . 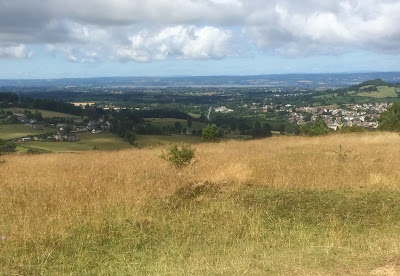 Ideas like weeds spring up from unexpected places. I am  reading Richard ' Rick '  Yancey's   post-apocalyptic trilogy, " The 5th Wave ". It is supposed to be aimed at young adults, but his writing is so expressive, that it can be enjoyed at any age.

in fact, I was so taken by the opening page of book two, " The  Infinite Sea " that I wondered if I could compose some lines loosely based on Yancey's text.

The result is the dystopian effort above.

Here is the trailer for the film of the book, which should give you a further insight:
5th wave

A full review of the trilogy will appear in a later blog. 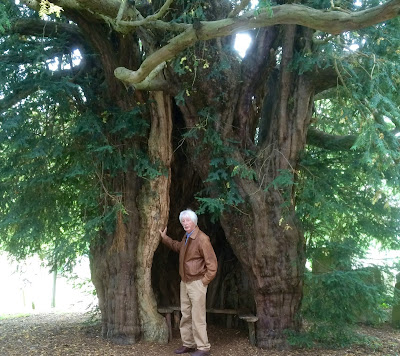 As you probably know by now, I have a passion for trees; especially old ones that refuse to wither and die.
The specimen above  is a splendid Yew in the churchyard of St Barts. in the village of Much Marcle, near Ledbury in Herefordshire. 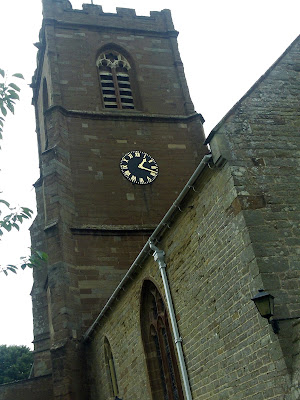 The tree boasts  eight seats inside its hollowed-out trunk. 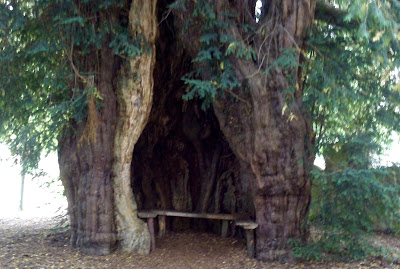 The tree stands in pride of place with its verdant foliage . 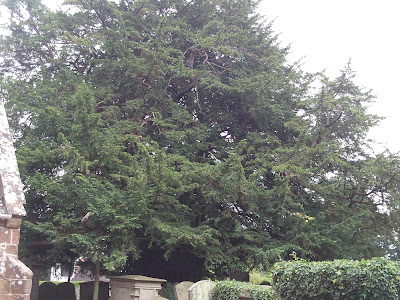 From " Timpson's England ," we learn that in 1575 Much Marcle hill slipped a distance of some 400 yards and in so doing killed cattle and sheep, flattening trees edges and destroyed  a small chapel.
Our tree remained unscathed by it all.

In 2006, the tree was pruned for the first time in years.. It is estimated that six tons of timber were removed.This work took forty five man hours and produced more than eight trailer loads of rubbish . The tree has new growth and looks healthy . 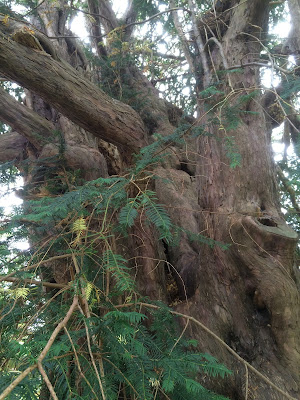 The tree has been certificated that it is at least 1500 years old.
Long may it flourish.

Last Thursday  ( 14 / 07 ) I made my annual pilgrimage to the Cheltenham Cricket Festival, held in the college ground . It was the second day's play in the County Championship against Essex.
I saw batsman Lawrence score a century for Essex  and the county  seemed well in control of the match, when I left.
However the game's fortunes swung back and forth and as I write this  on Saturday 16th, I have found out that amazingly,  Gloucestershire have won by 61 runs. Well done Lads ! 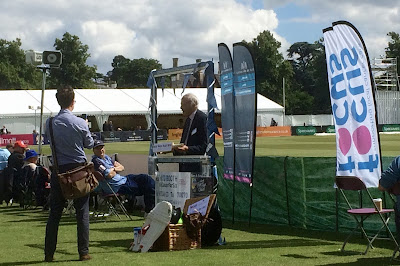 Harold 'Dickie ' Bird  ' in the frame'
for charity at the ground.
looking pretty chipper I must add.

So another breathless week ends, with Chris Froome looking favourite
to win another Tour De France.